skip to main | skip to sidebar

Imitation Is The Sincerest Form of Flattery 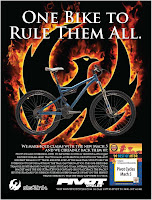 We at Pivot are known for our mountain bike innovations. We're more of a product and engineering driven company than we are a marketing company. But I think we've done some pretty cool ads, promotions and events (of course, I'm the marketing guy.) But we're pretty small. We'll never have the kind of budget or reach that some of the big guys will.

You would think that the big guys, with their fancy ad agencies and massive marketing and ad budgets would try a little harder to come up with some original ideas. So I was a little surprised to see the latest Sam Hill promo with the headline "One Rig to Rule them All." We are currently running a Mach 5 ad with the headline "One Bike to Rule them All," because the Mach 5 rules over a wide variety of terrain. We've been running this ad since August of last year.

On the one hand I'm flattered that someone would find my work good enough to lift. But on the other, I worked pretty hard on that ad concept and would like to keep it for myself. The only other scenario is that they have never seen our ad and came up with it on their own. But I don't find it likely. The ad runs in the same magazines they do and it has been running for 6-7 months. And it is a pretty noticeable ad, what with the flaming Phoenix and all. You turn the page and BOOM there it is.
Posted by bhbikes at 8:44 AM